What are the most effective corridors in, to and from the LSBP?

Marco Roos and others

6-12 months, preferably including the flowering season (in consultation)

The Leiden BioScience Park (LBSP) will be further developed according to a Masterplan LBSP- Gorlaeus, which includes more buildings and the accommodation of some 5000 jobs more. At the same time the Leiden community wants to enhance the biodiversity in the area. Presently a baseline monitoring is carried out compiling all existing data on flora and fauna. This internship focusses on analyzing these data to establish the biodiversity value of the different sites in the park, to propose the most prospective sites and measurements for further development of flora and fauna.

The objective is to map and underpin a network of corridors and source areas to be developed for enhancing the biodiversity in the LSBP in connection to its surroundings and the regional hotspots. For this purpose, biodiversity patterns along the gradients of these corridors between the surrounding areas (e.g. Endegeest, Bos van Bosman) and the Singelpark have to be mapped and analyzed in detail.

First, compile relevant available data bases and expand these with inventories of selected taxa. Statistically analyze the patterns in species occurrence along the gradients. Interpret the patterns found in view of the corridor function of the transect of plots.

Various parallel student projects can be carried out focusing on different taxa. 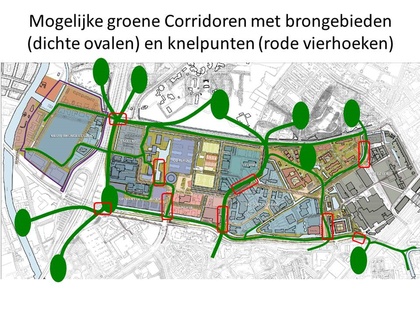