4D-REEF Past, present, and future of coral reefs in the Coral Triangle

Coral reefs are having a hard time. Reefs in the Coral Triangle stand out for their species richness, whereas there are many people living next to them. Will these reefs stand a chance in the future with ongoing climate change and pollution?

4D-REEF has received funding from the European Union's Horizon 2020 research and innovation programme under the Marie Sklodowska-Curie grant agreement No 813360.

From September 2019 to August 2023 we will investigate the past, present, and future of coral reefs in the Coral Triangle. The program combines geo-, bio- and climate sciences and 15 Early Stage Researchers will form the backbone of the project, involving 11 international institutes.

Using a variety of paleo-ecological and present-day data, 4D-REEF investigates the hypothesis that turbid coastal environments provide a refuge for coral reefs in periods of warm climate. The key questions to be addressed are:

By answering these questions, we aim to understand the role of turbid reefs for the future of marine ecosystems in the Coral Triangle as they respond to anthropogenic environmental change.

The Coral Triangle is a unique region in which the most diverse marine ecosystems are found. Over 700 species of reef corals, 3000 species of reef associated fishes, and countless taxa in other reef associated groups have been documented from this area. Yet, many of these reefs occur in settings that are not widely associated with coral reefs: the murky and turbid waters prone to terrestrial influence by run-off. Furthermore, a human population of more than 250 million people, of which a large part depends on shallow seas for subsistence inhabits the area. In 4D-REEF, the combined training-by-research projects of 15 Early Stage Researchers will study the potential of these reefs as refugia during ongoing environmental change.

Most of our work on recent reef systems will be conducted in the Spermonde Archipelago. This is an island group offshore Makassar (Southwest Sulawesi, Indonesia) in the Makassar Strait. The islands form a small barrier reef system of about 40 km wide and 100 km long. In the southeast of the shelf the Jene Berang is the largest river discharging into the Spermonde Shelf. Just North of the mouth of the Jene Berang lies the city of Makassar, the capital of Sulawesi Selatan, with a population of ~2 million people. The climate is monsoonal with a wet season from October to March.

The reefs in the Spermonde Archipelago are typical sand kay reefs. The most prolific coral growth is on the most exposed northwest side of the islands. Most reefs have a large reef flat of about 0.5 m water depth at low tide. The more exposed reefs on the west side of the shelf develop wide coral shingle ramparts separating the reef flat from the reef crest. Effluent from the Jene Berang flows over the entire shelf, influencing the ecological dynamics and interactions between the diverse reef organisms. 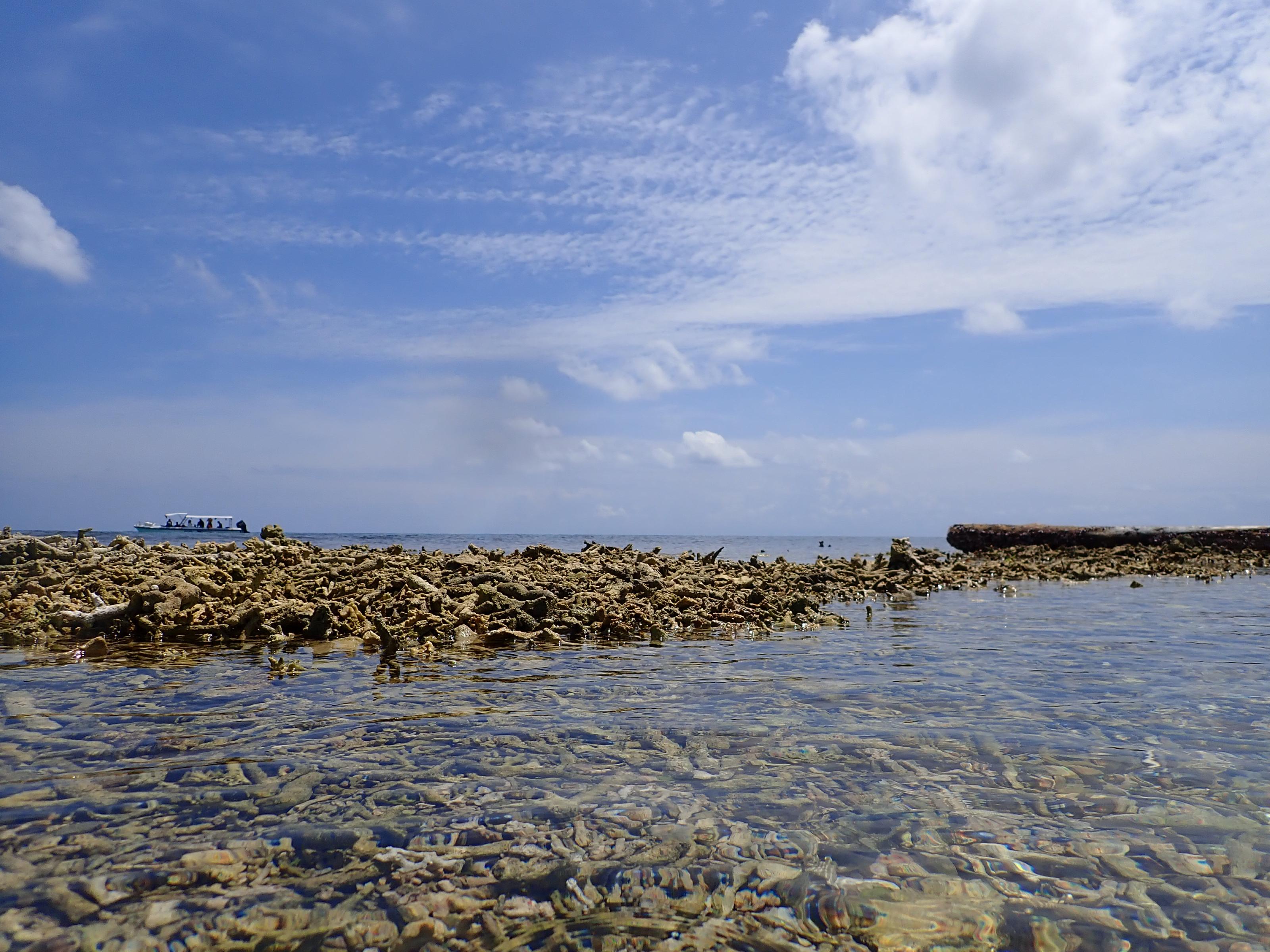 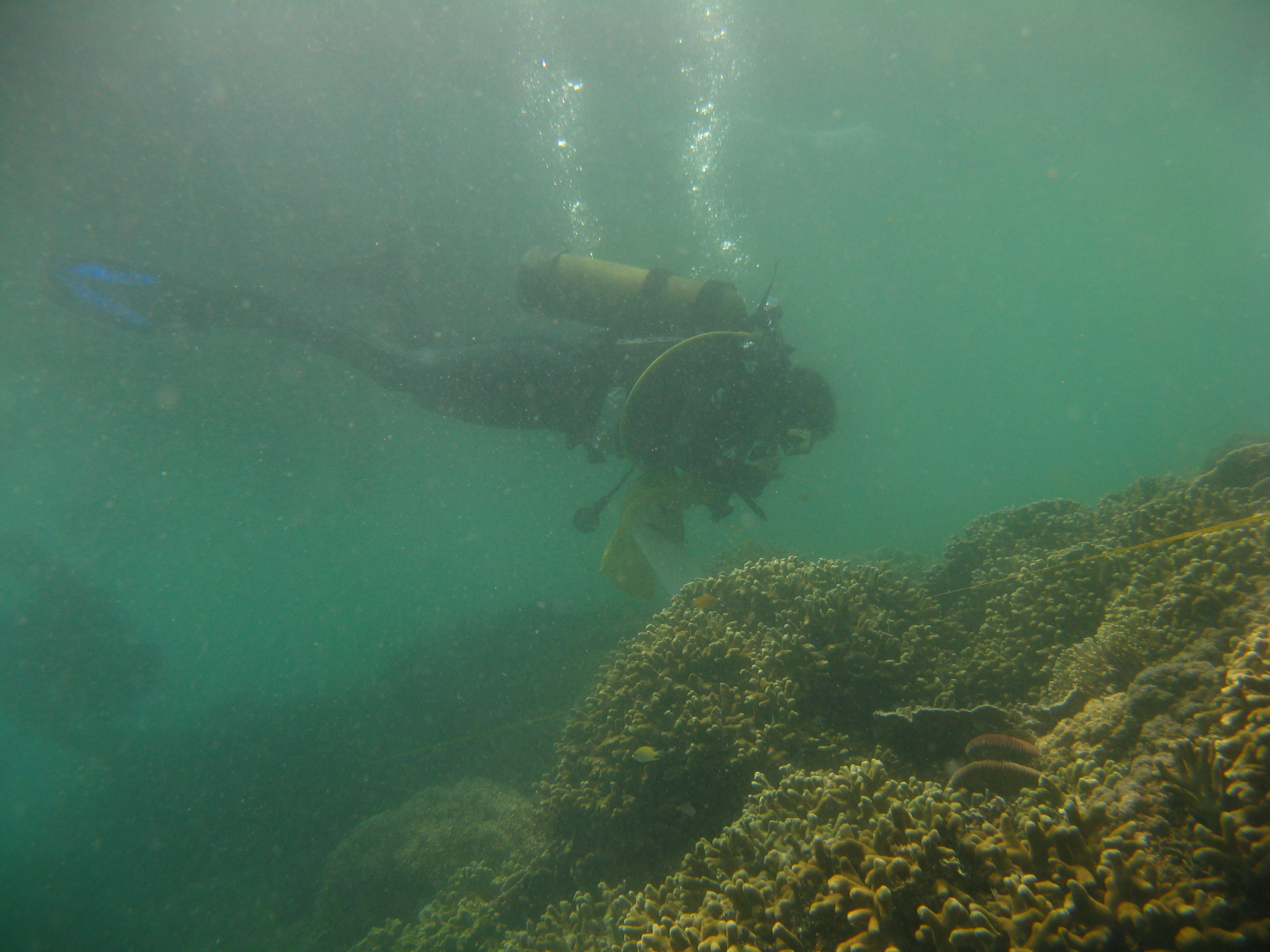 The sea floor in between the reefs increases gradually to ~60 meter water depth. Below wave base and away from the Jene Berang delta, the sea floor sediments are dominated by large benthic foraminifera produced carbonates. The positioning of these reefs at equal distance from the shore and increasing distance from the river mouth make the Spermonde an ideal site to study the functioning of turbid reefs.

The late Pliocene is often used as an analogue for future greenhouse climate conditions. During the late Pliocene extensive carbonate platforms developed in the central Philippines. One of these limestones is quarried near Cebu city on Cebu island. These represent a series of unique outcrops providing a 3D view on well preserved fossils on a fossilised carbonate shelf. In the higher part of the deposits coral reefs with well-preserved corals have been observed, whereas the deeper part of the sediment consists predominantly of well-preserved large benthic foraminifera. This provides a unique setting to compare between Pliocene and modern reef systems. 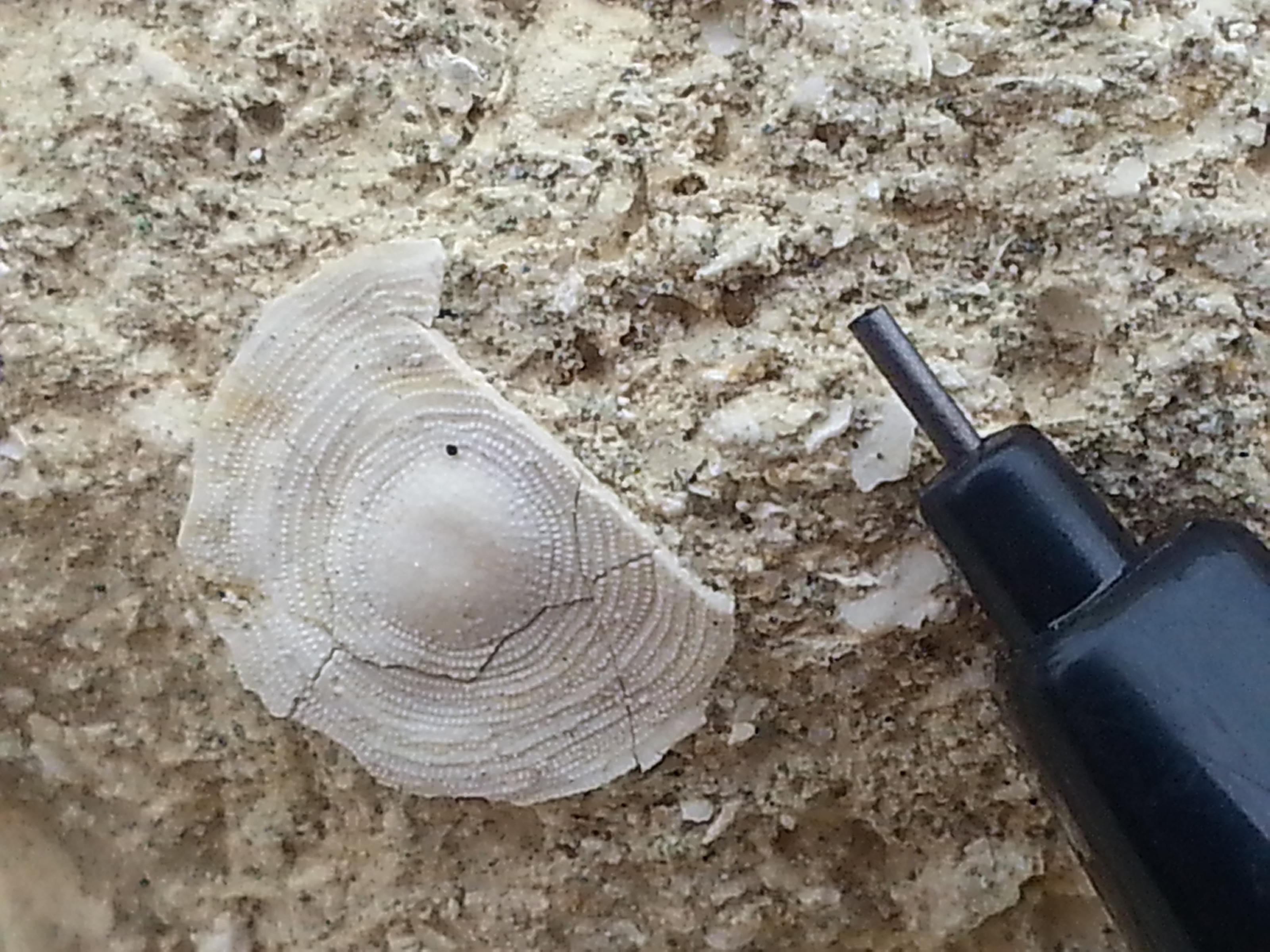 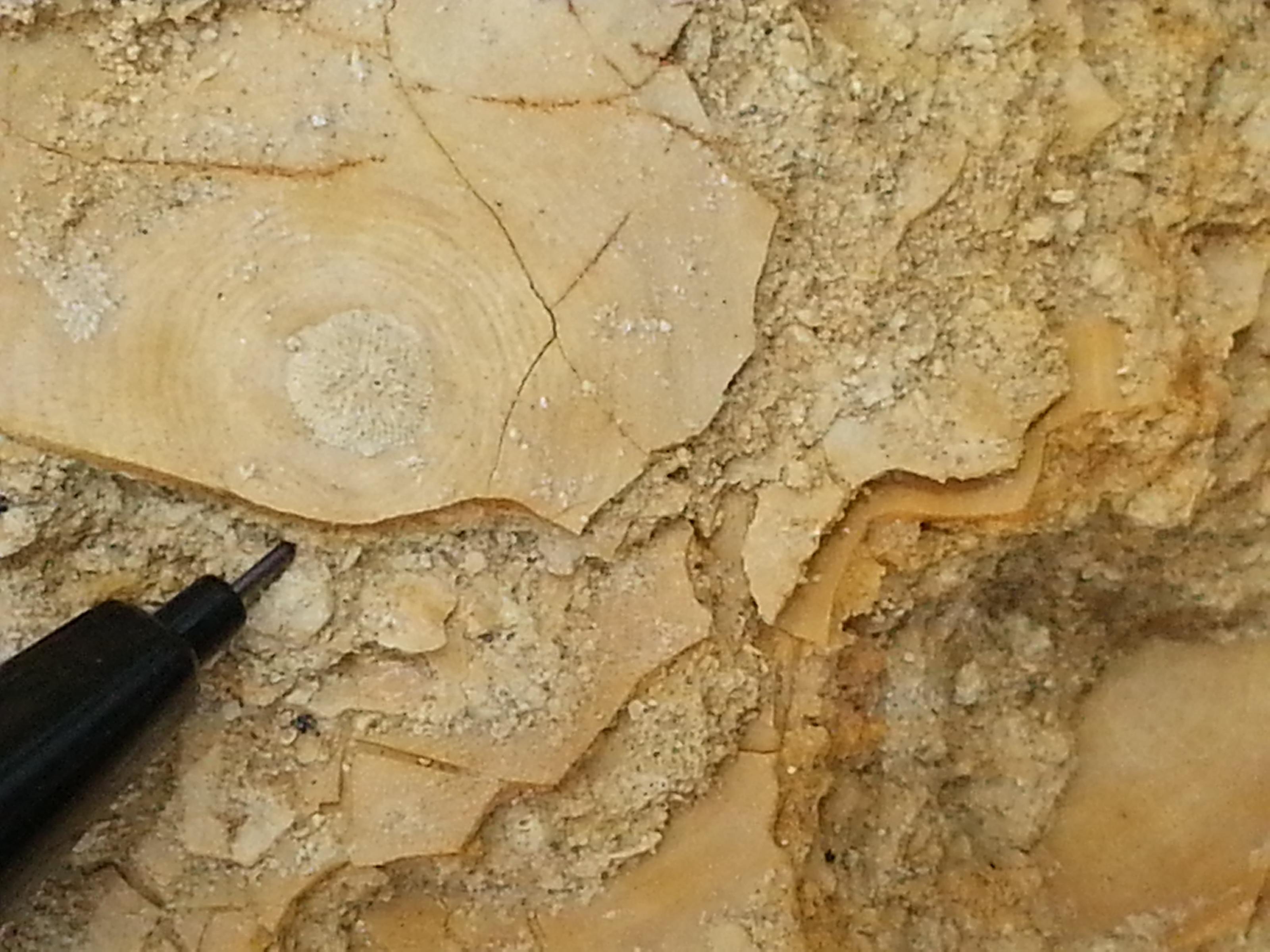 Beneficiaries
and partners in 4D-REEF

Naturalis is the Dutch national research institute for biodiversity and the national natural history museum. Over 120 researchers are working on scientific issues in the field of biodiversity on land and at sea worldwide: mapping species and their cohesion, the changing living environment and the influence of climate change. With one of the largest natural history collections in the world, our labs and our biodiversity data, we offer a unique scientific infrastructure: a veritable time machine that enables scientists to map the biological and geological diversity of the past, present and future. Scientific biodiversity research is fundamental to the protection of the natural riches of our Earth.

The Natural History Museum is one of the world’s oldest and most visited and is an active research institution with large numbers of researchers and postgraduate students. Experts from the NHM and institutions across the world research our collections in a friendly and inspiring environment. The Division of Invertebrates and Plants cares for over 9 million specimens with particular strengths in its worldwide systematic and faunal collections. Our research interests include documenting the history of biodiversity and environments and working to apply information from the fossil record to help inform potential trajectories of ecosystem response in our changing world.

The Departamento de Estratigrafía y Paleontología is a well-known centre of research on sedimentary geology and palaeontology. The ESR will integrate in a group focused on palaeobiology of calcareous algae and other carbonate producers. In the last decade, we have been working on the evolutionary history of coralline algae combining molecular systematics and fossil records in collaboration with experts in genetics at the University of Granada and other institutions (Universidade da Coruña, Spain; Muséum national d’Histoire naturelle, France). The Universidad de Granada is a research university with long-established Post-graduate studies. These include a Doctoral School of Fundamental and Systems Biology.

The ESR fellow will be working in the Palaeoenvironment Research Group of Prof. Wolfgang Müller at the Institute of Geosciences, Goethe-Universität Frankfurt (GUF). Wolfgang Müller is a leading expert in the field of palaeoenvironmental reconstructions at very high-time-resolution via (isotope) geochemical proxies, as evidenced by ~30 relevant international publications within the last 5 years, regular keynote invitations at international conferences and recent invited papers. He is co-director of the newly created ‘Frankfurt Isotope and Element Research Centre’ (FIERCE) and coordinator of the recently-awarded ‘Past Greenhouse Climate’ consortium (VeWA, LOEWE) at GUF. The research environment at Frankfurt is further enhanced by the Senckenberg Research Institute and GRADE (Goethe Research Academy for Early Career Researchers).

The University of Bristol is one of the leading institutions among the UK's Russell Group of universities and operates globally, where it is recognised for its research and academic excellence, regularly featuring among the top-ranking institutions in global league tables . The Schools in the Faculty of Science collectively come in the top three in the UK when compared against similar groupings in other research-intensive universities. Geographical Sciences was ranked number 1 across the UK in the last Research Excellence Framework (REF 2014), and Earth Sciences joint 2nd. The University is proud to promote a culture and supportive environment that enables science of the highest academic quality, and which maximises the impact of our research in both an academic as well as the broader societal context. Bristol is a vibrant and exciting city. It is routinely ranked by both national and international organisations as one of the top places in the world to visit, live in or work. It was the European Green Capital in 2015, the only UK city to win this accolade, and is a UNESCO City of Culture.

The Microsensor Group studies microbial ecology in a wide range of environments: seep systems, deep-sea and coastal sediments, coral reefs, anoxic lakes, microbial mats, and more. The research is highly diverse, encompassing themes of photosynthesis, nitrogen and sulfur cycling, calcification, habitat mapping, ecosystem productivity. A general interest is to study the function of intact communities with non-invasive methods that allow as direct an observation as possible. To this end, we develop, construct and use microsensors for laboratory and in-situ measurements, which can rapidly measure chemical fluxes caused by cells. We also develop and use several imaging technologies to non-invasively map the function and describe the structure of habitats. The technolgies we employ are hyperspectral imaging, planar optode imaging and beta radiation imaging. The HyperDiver, a diver-operated hyperspectral imaging system, allows seafloor mapping at ecologically relevant scales and will be a primary working tool for the 4D-REEF project.

The Leibniz Centre for Tropical Marine Research (ZMT) in Bremen is the only scientific institute in Germany that investigates tropical and subtropical coastal ecosystems and their importance for nature and people. With its work, the ZMT provides a scientific basis for the protection and sustainable use of these tropical coastal ecosystems. In addition to research, the focus lies on capacity development and consulting activities – always in close cooperation with international and national partners. As a member of the Leibniz Association (since 2009) the institute is funded by the Federal Republic of Germany and its 'Länder‘. The workgroup Geoecology and Carbonate Sedimentology at ZMT deals with biogenic carbonate production along tropical coastlines, and how environmental influences (temperature, nutrification, acidification, sealevel change) act on the productivity and composition. The workgroup closely collaborates with that of co-advisor Alessio Rovere at University of Bremen that specialises in sealevel reconstruction in the present and recent past.

University of Aveiro (UA) is one of the most dynamic and innovative universities in Portugal. It is currently attended by approximately 17000 graduate and post-graduate students, 9% of which are international students. The academic community further comprises around 1400 teaching staff and researchers, and 630 technical, administrative and managerial staff. At UA, the ESR will be based in the Laboratory for Molecular Studies of Marine Environments (LEMAM) at CESAM/DBio, which has an extensive experience on structural and functional studies of microbial communities in marine ecosystems. The ESR will also be engaged in collaborative research work with Naturalis Biodiversity Center (Leiden, Netherlands).

Deltares is an independent institute for applied research in the field of water and subsurface. Throughout the world, we work on smart solutions, innovations and applications for people, environment and society. Our main focus is on deltas, coastal regions and river basins. Our motto is Enabling Delta Life. We aim at the highest quality of expertise, and effective use of our knowledge in and for society. The Coastal and Marine Systems Unit develops and uses hydrodynamic, morphodynamic and ecological models to advise on sustainable management of our future coasts.

Ocean Maps produces interactive 3D visualizations of the underwater and of water-related infrastructure like hydroelectric plants. Various kinds of data, like multibeam or LiDAR bathymetry, laser scans, drone photogrammetry or CAD data are integrated into multi-platform applications. In 4D-REEF Ocean Maps' interdisciplinary team of software developers and surveyors is applying its experience in the visualization of coral reefs in service of science and the publication of research results. Easy to use maps and displays are created and deployed on consumer devices like smartphones and tablets to engage the general public and communicate the highly relevant topics 4D-REEF is concerned with.

In 2009, the Earth Observatory of Singapore (EOS) was officially launched, with the broad goal to conduct fundamental research on geohazards in and around Southeast Asia, toward safer and more sustainable societies. EOS has two purposes: acquiring scientific knowledge on some of the most complex natural phenomena, and passing this knowledge on to affected populations so they can use it effectively and in timely fashion.

Cefas is a world leader in marine science and technology, providing innovative solutions for the aquatic environment, biodiversity and food security. Researchers at Cefas will be involved in the supervision of one of the ESRs.