"I wish to contribute to our knowledge on the world-wide taxic biodiversity and evolution of freshwater, marine and terrestrial planarians (Platyhelminthes, Tricladida).”

In general I wish to contribute to our knowledge on the world-wide taxic biodiversity and evolution of freshwater, marine and terrestrial planarians (Platyhelminthes, Tricladida).

The geographic scale of my research is generally global or at least concerns major parts of the globe. Assessments of global biodiversity hotspots are biased in that the less charismatic invertebrates, such as flatworms, are generally neglected, although invertebrates form the major component of biodiversity.

Although this is interesting in itself, these animals may also be good model organisms to study terrestrialization during evolution. The terrestrialization of animal life from marine or freshwater ancestors is a key transition during the history of life. Planarian flatworms (Platyhelminthes, Tricladida) form an ideal group of model organisms to study this colonization of the land because they have freshwater, marine, and terrestrial representatives.

Starting out as a fledgling bird watcher at the age of seven years old, while rowing in my little boat among the marshes and meadows north of Amsterdam,  I did eventually graduate at the University of Amsterdam, majoring in ornithology. However, at the end of my Master’s I came also across the group of triclad flatworms, to which I switched my scientific and professional attention. Although I will never cease watching birds,  it dawned on me that invertebrates actually constitute the major part of biodiversity and that much remains to be discovered about their taxic diversity.  And therefore I took on triclad flatworms as model organisms to study the evolution, phylogeny and biogeography of a selected group of invertebrate animals. 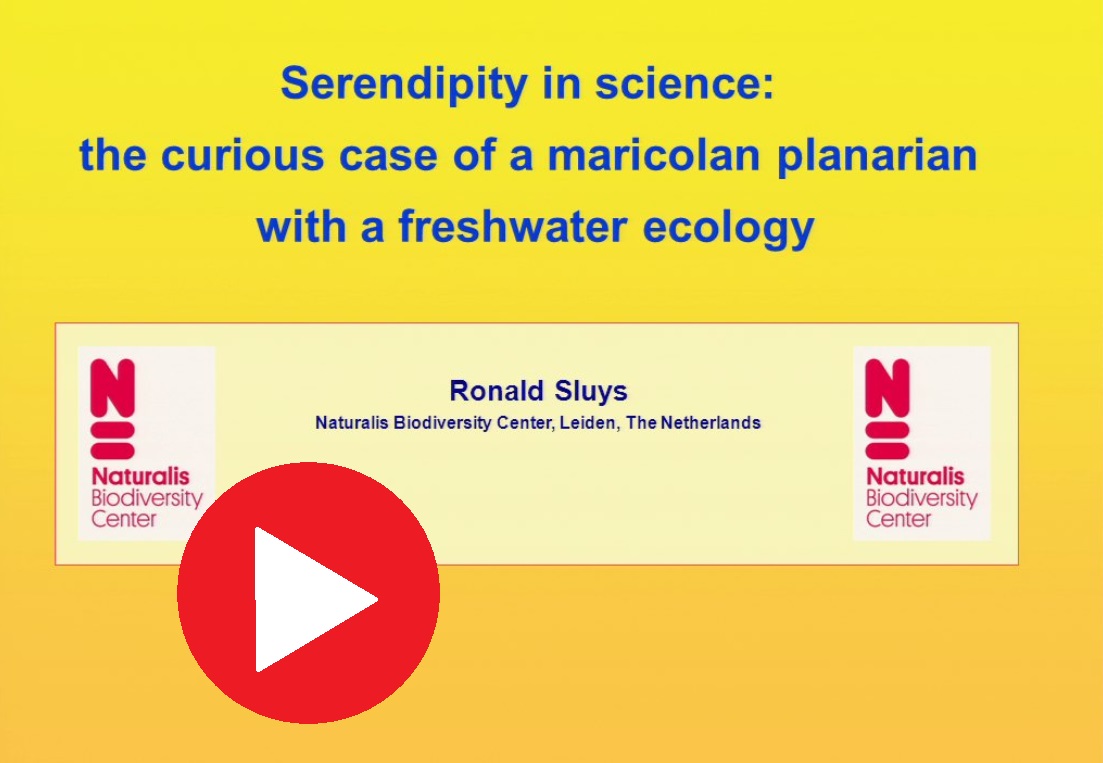 Sluys R., Kawakatsu M. 2001. Contribution to an inventory of the freshwater planarians of Australia and New Zealand (Platyhelminthes, Tricladida, Dugesiidae), with distribution maps of the species examined. Beaufortia 51: 163-198.

Sluys R. 1996. The notion of homology in current comparative biology. Journal of Zoological Systematics and Evolutionary Research 34 (3) : 145-152.
Sluys R. 1996. Reconsiderations of the species status of some South American planarians (Platyhelminthes, Tricladida). Proceedings of the Biological Society of Washington 109 (2) : 229-235.
1995

Estep K., Sluys R., Syvertsen E.E. 1993. "Linnaeus" and beyond: workshop report on multimedia tools for the identification and database storage of biodiversity. Hydrobiologia 269: 519-525.
1992

Sluys R., Benazzi M. 1992. A new finding of a subterranean endrocoelid flatworm from Italy (Platyhelminthes, Tricladida, Paludicola). Stygologia 7 (4) : 213-217.
Sluys R. 1992. A synopsis of Antarctic Plagiostomids (Platyhelminthes, Prolecithophora), with the description of a new species and remarks on taxonomy, phylogeny, and biogeography. Polar Biology 12 (5) : 507-518.
1991

Sluys R. 1987. The taxonomy of three species of the genus Procerodes (Platyhelminthes, Tricladida, Maricola). Journal of the Marine Biological Association of the United Kingdom 67 (2) : 373-384.
1986

Sluys R., Ball I.R. 1985. On Bothrioplana semperi from Australia, with a review of the species (Platyhelminthes, Proseriata, Bothrioplanidae). Beagle: Records of the museums and art galleries of the Northern Territory 2: 129-137.
1984